From the Financial Reports issued by the NCAA it is clear that the athletic budgets of  men’s basketball and football at many institutions in the Football Bowl Subdivision (FBS) are increasing at an alarming rate.   For example, the 2006 budget showed a 14% increase for men’s sports over the 2005 budget, while the budget for women’s sports indicated only a 6% increase.  Men's football and basketball now consume 78% of men's athletics operating budgets.  A further analysis of the FBS 2006 budgets indicated that football expenses accounted for 59% of the men’s sport budgets, men’s basketball expenses amounted to 19% of the budget leaving only 22% for all of the other men’s sports. 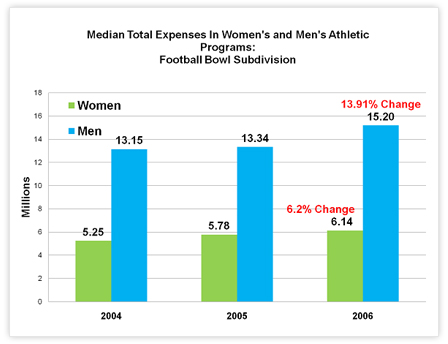 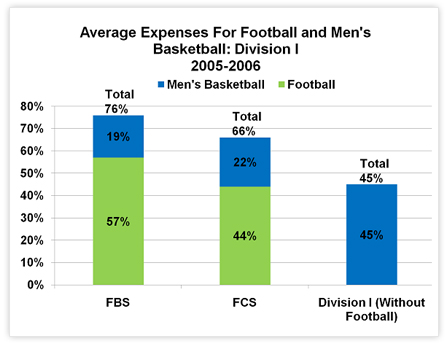 There are two very important implications of these trends.  One, to allocate identical budgets to the same sports in men’s and women’s programs effectively eliminates consideration of the entire football budget.  This is in violation of Title IX guidelines which require an overall program vs. program analysis rather than a sport by sport analysis.  This approach also relegates almost all women’s sports to the “minor” classification that has been created in men’s sports.

If an athletic department determines to continue the major/minor classifications in both its men’s and women’s programs, then care must be taken to do it in a manner that complies with Title IX mandates.  In the following example, this institution wishes to classify three men’s sports as “major: 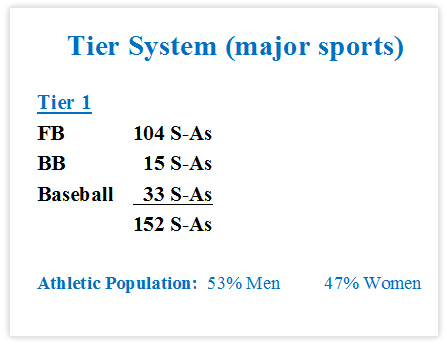 Since the athletic population is comprised of 53% men and 47% women, then the same formula must be used to determine how many women’s sports will be classified as “major” as noted in the following example: 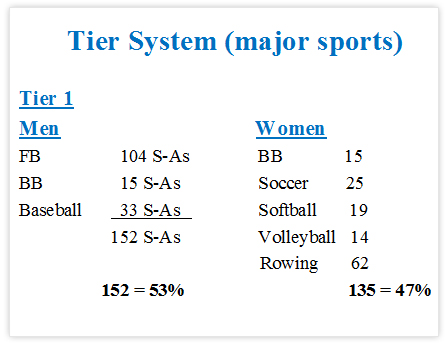 For the last eight years, there has been little or no enforcement of Title IX.  This pattern is predicted to change rapidly with the current administration.  It would be prudent for each athletic department to determine if current practices are complying with the federal legislation in order to ensure that no valid discriminatory practices can be found in this area.

Common Sense in Responding to Athletic Program Financial Crisis
If I was an FBS athletic director, my top worries in 2017 would be…
Think Twice before Supporting the Idea of College Athlete “Employees”